When you’re looking at which solar energiser to purchase for a 100m or 150m electric netting set up the
same basic principles apply – namely where do you live and what are your expectations?

To work out which solar energiser suits your requirements, we need to know when and for how long you
intend to use the energiser as well as how the electric fence fits into your overall flock protection plan. For
example, are you running the energiser 24/7/365 and is it the sole line of defence between your flock and
predation? Or is this just a weekend / hobby thing and the flock is securely locked away every single night?

A quick note on energiser capacity – energisers are measured in “Output Joules” (J). A 100m set requires
an energiser with a minimum of 0.5J, 150m around 0.8J etc. You can always put more power than you
need into an electric net but you cannot put less. Another way of looking at this would be to say – regardless
of where you live or what your expectations are, the power level you require remains the same, what
changes are the size of the battery and the solar cell.

The big issue here is that you will need sufficient solar cell wattage to charge the battery all year round –
especially during the winter months. For example, if you live in an area that gets about 4 hours of Sunshine
per day in June (primarily VIC and TAS) then you will need an absolute minimum of a 10W solar cell to get
a 0.5J energiser powering a 100m electric net through the winter (this would be a marginal case).

(Just a quick diversion here – a solar energiser which comes in one box and all the bits are moulded into one
piece is called an “integrated” energiser. Bigger energisers where you purchase the battery separate from
the energiser separate from the solar cell is called a “custom build”)

So, since you will need a 10W solar cell to get through the winter you are looking at the larger integrated
sets or possibly some of the smaller custom builds. The best value custom sets are made by JVA, but if you
would prefer an integrated set then Nemtek or Thunderbird are your best options.

If you choose to go with a custom build then for the battery your best option is to purchase one from your
local battery dealer. The bigger the battery you purchase the longer it will last in poor weather conditions. I
would recommend that a 100Ah battery will get you through most winter conditions.

If you live in an area that gets more than 6 hours of sunshine per day in June (roughly north of the line from
Coffs Harbour to Geraldton) then you can reduce either your solar cell or your battery but not both. You will
need the same size energiser however as you are still powering the same length net.

For the purposes of this article I am going to assume that a “Hobby Operator” only uses the net in the
warmer months of the year (say September through to April) or locks their flock indoors at night and turns
off the energiser.

The big advantage that “Hobby Operators” are going to have over the “24/7/365” crew is that the hobby
operator can turn off the energiser at night during the winter months which effectively doubles battery
capacity. Therefore the integrated sets usually win here due to the ease of use and portability,

You are still going to require an energiser with an output over 0.5J, which means we can look at integrated
sets such as the Thunderbird S45B or the Nemtek Agrisolar 8.

By and large the same rules apply in Northern Australia for hobby operators. Having the ability to turn the
energiser off at night makes roughly halves the amount of battery or solar cell capacity required so the
integrated kits are usually the best option although any energiser bigger than this will also do quite nicely.

What I am going to do here is try and make an educated guess and rank all energisers on the market that
fit in the 100m to 150m electric netting sizes. I will rank firstly by capacity, taking note of the solar cell and
battery capacities and then price. 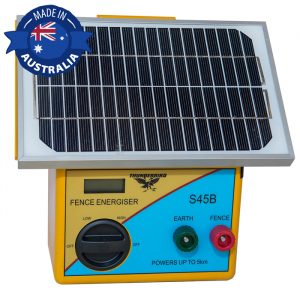 ★ Thunderbird S45B. Output of 0.5J, Solar cell 5W, Battery 7Ah. Can power 100m of netting but
does not have the solar cell / battery to get through winter in the south. Can perform year round in
QLD but only seasonally in the south. Does come with a mains charger to get you through the less
sunny months if required. Low battery warning, high and low operations. 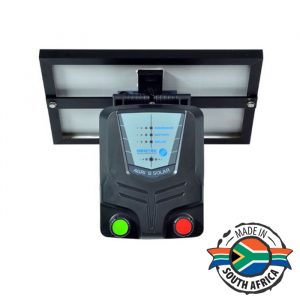 ★ Nemtek Agrisolar 8. Output 0.7J, Solar cell 10W, Battery 7Ah. Can power 150m of netting but is
marginal. Has a 10W solar cell which is bigger than the competition, but the battery is the same size
(but has a longer warranty). 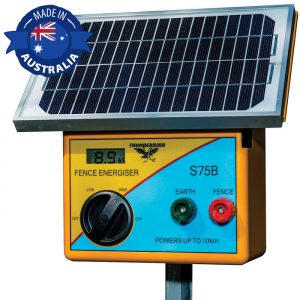 ★ Thunderbird S75B. Output of 0.7J, Solar cell 5W, Battery 7Ah. Can power 150m of netting but is
marginal. Does not have the solar cell / battery to get through winter in the south. Can perform year
round in QLD but only seasonally in the south. Does come with a mains charger to get you through
the less sunny months if required. Low battery warning high and low operations. 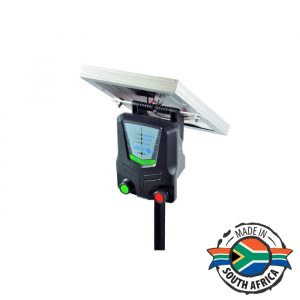 ★ Nemtek Agrisolar 10. Output of 1.0J, Solar cell 10W. Can easily power 150m of netting but does
require the purchase of a separate battery. Paired with a big enough battery this energiser should
get you through winter in almost any part of Australia. 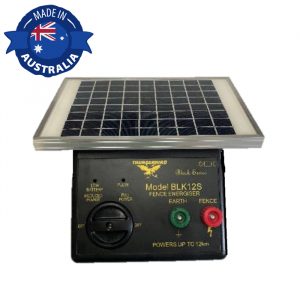 ★ Thunderbird 12S. This is a basic energiser with a 1.2J capacity. Therefore it will power 200m of
netting, but it has limited battery and solar cell capacity. The biggest drawback is that it does not
have a mains charger – therefore if the battery runs flat the only way to recharge it is to leave it
sitting in the sun for a few days – not ideal in winter. However, if you only use the net for a few days
at a time and in the warmer seasons it should work fine. 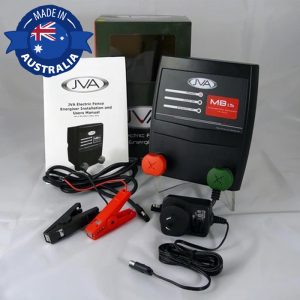 ★ JVA MB1.5 Solar. Puts out a charge of 1.5J which also puts it in the 200m of netting category. This
is a nice simple system with a 20W Solar cell but you will need to supply your own battery. Pair it
with a big battery and the 20W solar cell should be able to get a 100-150m electric net powered
throughout the year in all areas. The main downside is that it has no battery condition lights or a
display to indicate output levels.

★ Thunderbird S180B. This is the biggest integrated solar energiser on the market. It puts out 1.78J
and therefore can handle up to 250m of netting. You can switch between high and low output
functions. It has a digital screen which displays voltage, amps and low battery. It also comes with a
mains charger so if you do run the battery flat you can bring it inside for a top-up charge. It has a
12W solar cell and a 14Ah battery. This makes it a good option for summer operations but not for
winter especially the further south you get.

1. Don’t just choose the biggest! An energiser with twice the output will also drain the battery twice as
fast. So if your fencing set up requires 0.5J in order to function, choosing an energiser with an
output of 1.0J to 2.5J might make sense but 5J is a bit silly.

2. Choose JVA products if you just want something simple and cost effective. There are no indicator
lights so you should purchase a fence tester at the same time.

3. Nemtek products are for people who want to set up the system to suit their needs. Fully
programmable with separate day / night operations, output levels and pulse rates. Multiple indicator
lights and the works.

4. Thunderbird is best if you just want to take it out of the box and not lug batteries around. 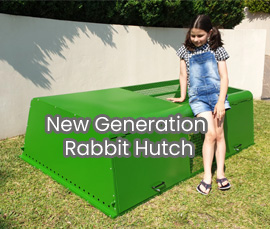